Getting back to travel, I’m just wondering how many of you shop ’til you drop when you vacay?  I bet many of you are taken in by useless tchotchkes, shoes that you just have to walk away with, jewelry that matches the sparkle in your eye and clothes that will reside on your elliptical for years to come.  I eschew touristy souvenirs, I have absolutely no use for them.  I do have a weakness for clothing and accessories though.  Plus, I’m a generous hearted Leo who likes to buy useless, yet thoughtful gifts, for family and friends that make the cut.  This translates into sometimes going over our paltry $800 limit (remember I’m Canadian).

It used to be even worse, and cross border shopping meant pulling tags off, donning about 6 layers of clothes, throwing out old shoes so I could wear new ones and looking like the Michelin Man as I got questioned by Canadian Customs.  Not being a natural liar, I usually stuttered through the answers or mumbled into one of the 5 sweaters that I was wearing (in the heat of the summer) that I spent about $50.  LIAR LIAR pants (3 pairs to be exact) on fire, I knew that Officer Bob was thinking to himself as he sighed and let us pass through.

There were times that I couldn’t lie or layer my clothes in such an overt way because I made the mistake of going to the US with someone that had been black listed.  Declaring pained me, so I’d sneak a sweater or blouse into my over-sized purse and hope that my friend didn’t discover my little peccadillo.  Then, I started going with one of my dearest friends who could lose her job if she was caught lying at the border and a condition of cross border travel meant…shudders…being completely honest.  At first, I resented it, but as more time went by, and I was waved through without paying duty, even when I overspent, I started appreciating the weird freedom that honesty brought.  I no longer was tongue tied  when I spoke to Customs.  I also looked better – 3 pairs of pants and 5 sweaters is just FUGLY.

The last two trips that I took, I was declared positively everything to the dime, and guess what?  I got brownie points.  One nice Agents of the Shield gave me a discount because I was honest so I paid a measly $30 – think of it – you lie to save $30?  Not worth it in my humble opinion.  Last night, when I got back from New Orleans, I was over by $50 – but declared it anyway – I have to be honest because I have Nexxus Card.  Once again, I was rewarded for being a do-gooder and paid absolutely zip.

So what does this all add up to?  Do you really want to stammer haltingly through a border crossing or sweat through your new clothes to avoid a few dollars at the border?  I no longer do, and I do declare, it’s freeing.  Enjoy your travels. 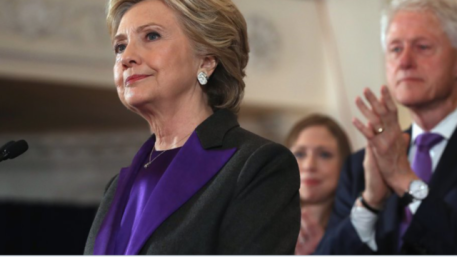 I’ve been a fan of Hillary Rodham Clinton since Bill Clinton’s Presidential campaign in 1992.  Her line –  “I suppose I could have stayed home and baked cookies and had teas, but what I decided to do was to fulfill my profession which I entered before my husband was in public life.” told me that this was a different kind of candidate.  Obsessed with US politics, I’ve watched every political convention and election since Ronald Reagan beat Jimmy Carter.  I never watch Canadian elections or debates, but for some reason, I can’t get enough of what’s happening in the US of A.  Maybe it’s the pomp and pageantry, the true power of our neighbours to the south.  I can’t answer that, but I can say that in 1992, I knew that Hillary wouldn’t be a traditional First Lady, and she wasn’t.  She was as accomplished and brilliant in her own right as her husband.

I’m not going to recite her resume for you, we all know that, but I can tell you that it was beyond exciting to see a woman on the ballot for President.  I, like many, were convinced that Hillary was going all the way to the White House.  I had my Hillary shirt on last night, and have a Madam President magnet on my refrigerator.  All the way through the election, Hillary was criticized for being too scripted, too studied, disingenuous, over-prepared, and a host of other sins that any Type A would find annoying.  She never lost her cool or said that I’m running for President, not Prom Queen – bless her heart.  I had the honour of seeing her speak several years ago, and yes, I’m sure she was paid for the event, but I don’t care.  She was warm, funny, brilliant and didn’t look at a single note.  I wish people could have seen the Hillary that I saw.  It was in that moment, that I realized that I was in the presence of greatness.  I’m not exaggerating.

“Flori-duh”, “Dump Trump”, “Lock Him Up” – these were some of the things going through my mind last night.  I had hope that she would pull out a victory, but at a certain point, it wasn’t meant to be, and my heart broke a little bit.  The glass ceiling was not going to be shattered, Bill wasn’t going to be First Gentleman and the Pant Suit Brigade was going to have to go for a new look.   It was a bitter pill to swallow.

Today, I found more reason to admire HRC as she gave her concession speech, tears in her eyes, in a rare display of emotion.  She showed grace and dignity in the face of abject disappointment.  Her speech, one of the most inspiring of her run, brought me to tears.  I learned valuable lessons from Hillary – love Trumps hate, showing graciousness in defeat says a lot about a person, a life devoted to service is a life well spent and never believe polls.  I know I’ve been broken-hearted, but I also learned from Hillary that you have to keep moving forward, so in my head, I’ve already committed to stop commenting on this election, it’s not my election, nor my country and it is what it is.  I want to leave you with the quotes that touched me the most from her speech today:

“To the young people, in particular, I hope you will hear this.

I have, as Tim said, spent my entire adult life fighting for what I believe in. I’ve had successes, and I’ve had setbacks… sometimes really painful ones. Many of you are at the beginning of your professional, public and political careers. You will have successes and setbacks too.

This loss hurts. But please, never stop believing that fighting for what’s right is worth it.”

“To all the little girls watching…never doubt that you are valuable and powerful and deserving of every chance and opportunity in the world.”

Thank you Hillary Clinton for inspiring me and for teaching a generation of little girls that nothing is impossible and to keep moving forward, even in the face of defeat.