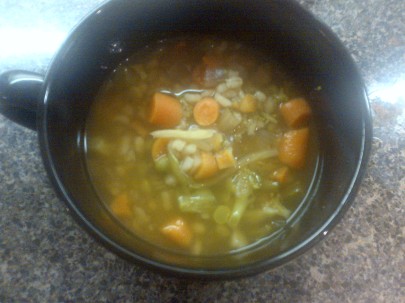 I knew that 2015 was going to be a year of change.  I had that feeling on December 31st.  I just wasn’t quite sure what that meant for me.  So far, it has been difficult, but sometimes, not to sound like Polly Pureheart, those difficulties spur you to explore the unexpected.  One day, when my mother wasn’t having a great day, I told her that I would cook for her.  She would just have to be there for me and tell me step by step what to do.  After checking her life insurance policy, she agreed.  Not nice Mummy!  I spent the afternoon making soup for the first time, spaghetti sauce for the first time (beef stinks when it’s cooking – I’ll try to keep my chick-a-fish-a-veg-atarian self away from Elsie the Cow for the rest of my days), baked chicken breasts (not the first time, but only about the third time making this dish) and egg salad (BLAH – too smelly for me to ever eat).  You know, it wasn’t as bad as I thought.  It’s just weird how someone just knows how much of everything to add without a recipe (my mother, not me).  So far, she’s survived the experiment.  I made the soup – pictured above, at home for myself.  It was ok day 1 but on day 2, I was about to gag on it.  It did have a lot of Oz approved foods – fresh onion (pre-biotics to super-charge my probiotics), carrots, celery, cabbage, snow peas and a package of dried vegetables and barley.  I probably won’t make it more than once a year, but it was nice adding something to my limited recipe book.

This will also be a year of trying new things.  It means a Zombie “Escape the Room Challenge” and Axe Throwing.  It means doing things that I’ve never tried before, even if they are outside of my comfort zone.  It means committing to a cut off time for work.  It means that in the interests of decluttering, that I actually un-friended someone from Facebook.  Not a big deal, but it was time to do a little tune up.  Why have someone there who clearly I haven’t had a conversation with in years?  I’ll be doing a little more of that in the future – but it was a start.

I also recognize that in order to live in a relatively healthy way, I have to learn how to cope with worry.  I dealt with being sick for most of January (which I wrote about).  This didn’t worry me, but it kept me from being able to write as often, or as clearly as I may have wanted to.  It left me a little fatigued, but that’s partly stress.  A huge work project finally came to an end, which caused me a lot of sleepless nights – but it went well, so that’s a relief.  Last, but most importantly, my family and I have to cope with a challenging situation – I can’t get into details, yet, but it’s not easy.  Luckily, we are supporting each other and for that, I am grateful.  Here are some of Dr. Oz’s tips for coping with worry (from doctoroz.com):

I’ve signed up for Deepak Chopra and Oprah Winfrey’s latest 21 Day Meditation Experience in March.  I also have 3 other meditations streamed.  As I’ve mentioned, I will always struggle with it, but so many doctors recommend it, that I’ll never stop trying.  I’m already a tea lover, so that’s never an issue, but I am going to see what foods help cope with stress.  I’ve also got to give yoga another try – maybe a laughing yoga class, because I have such a hard time taking it seriously?

Today is Family Day in Ontario, and as always, I like to end on a note of what I am grateful for.  Today, in honour of Family Day, I am grateful to my family, frousins and friends that are like family.  I’m lucky to have all of you.

I’m sorry about my absence from writing and I’m sorry to my Shoe for her belated birthday blog.  I finally feel ok enough to write again – that cold, and a huge project that I’m working on at work, ironically, have sapped my energy.  My dearest friend is called Shoe because she called me that at one point.  I was the friend who was comfortable and didn’t give her blisters.  Over time, someone, I become her Sock, since she’s older than me and Shoes came before Socks.  Odd I know, but it works as nicknames for us.  Today, in honour of her belated birthday, I thought I’d re-write Adam Ant’s Goody Two Shoes for her so please bear with me – I promise to get back to health related topics next week.

With the Door to the Hyundai open
So much you can’t hide (the McCafe cups)
Put on a little make-up, make-up (cause you only wear a little)
Make sure they get your good side good side

If the words unspoken
Get stuck in your throat like a frog
Send a subway token, token
Write it on a pound of Purdy’s chocolate box or pound note

We don’t follow fashion unless it’s Banana Republic or Loft
That would be a joke
You know we’re gonna shop them, shop them
So everyone can take note, take note

When they saw you shopping
Crying words that you mean
Opening their eyeballs, eyeballs
Pretending that you’re spending green, spending green

No one’s gonna tell you
What’s wrong or what’s right (except sometimes me)
Or tell me who to eat with, shop with
Or that I’ve won the big fight, big fight

If the words unspoken
Get stuck in my throat
I’ll Send a subway token, token
Write it on a pound of Purdy’s or Louis Vuitton tote

Sorry Shoe – there just aren’t sentimental Shoe songs so this is the best that I can do.  I hope that you had a great birthday and that this is your year.  No matter where we are in life, I will always be your devoted little Sock.