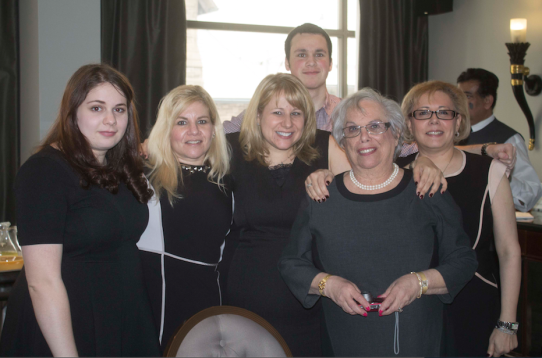 “Was Zaydie as good of a person as you remember him to be?” I asked my mother about my grandfather one day.  Everyone just thought he was a wonderful, kind gentleman, and my mother was the original Daddy’s Girl, but I was still curious.  “Oh no, Jill, he wasn’t.  He was better.”  Even though it’s only been 6 weeks, I can already tell you the same thing about my mother, she was better than I remember.   We had our first holiday without her two weeks ago.  Now, it’s her birthday and we are trying to figure out what to do.  I did a little self-torture, looking at birthday cards that I wouldn’t be able to give her.  That was the day that I got a little sign from her.  Last night, I read cards and poems online that people wrote to their dead mothers just to make sure that I could cry, although, there hasn’t been a shortness of tears on my part.  She really was special. 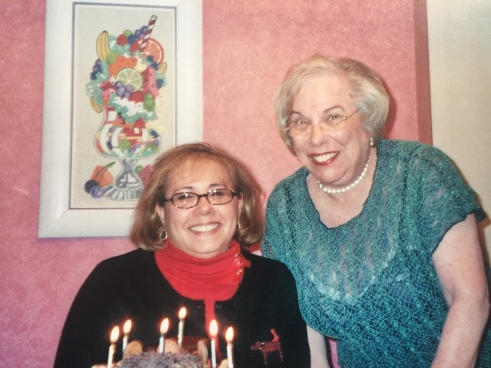 Nobody loved a birthday more than my mother, especially the cake.  Every year, we had buy her the same cake – the repulsive store bought chocolate cake with the GIGANTIC pink roses.  She loved it, and every year for my birthday, when I was growing up, I got that very cake even though I hated it.  She’d always say “Tough luck.  I love it, and that’s what your getting.”  That was my mother – every inch a brat.  But before you write her off, that was only one part of my mother, she was so much more than that.  I could gush about how brave she was, but here is a quote from my cousin, a very religious and learned Rabbi, when I ask him for a quote for a treasured book in our family:

Judith Schneiderman returned her heroic,courageous and dearly beloved soul to her Maker on March 3, 2018. May She find comfort forever in the everlasting world. Rest peacefully. Never to be forgotten.

You see, my mother was heroic, not because she had cancer, but because of who she was.  You don’t become a hero because of a disease or because you die, you become one because of how you live you life and my mother lived her life with honour.  She was honest and giving and made decisions that were right, even when they weren’t right for her. 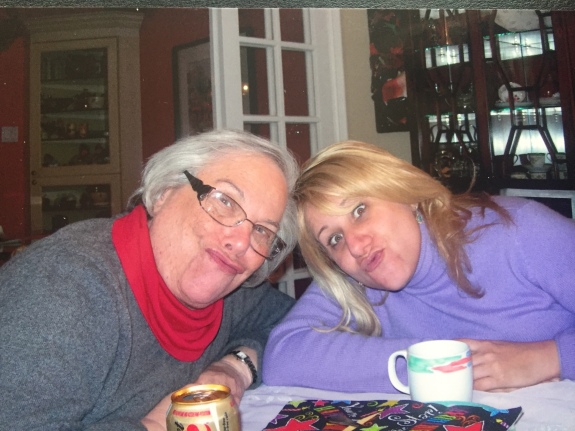 I was told by many people how special my mother was to them.  One of her pottery teachers wrote this to me “I often told her that when I “grow up” I want to be just like her. “  Me too.  My mother loved life.  Even when she was at her sickest, she still lived it.  She managed her pain from cancer with nothing more than Tylenol until 6 days before her death when she couldn’t handle it anymore.  Even though she was bed-ridden the last year of her life, we still laughed, and she still loved having visitors.  She was still herself.  She was curious about everything and she never felt sorry for herself, not even once.  I wish that I could be as brave as she was.

To be a Motherless Daughter is a very sad thing.  My sister wrote these beautiful words:

“The end is the beginning

A slap, a cry, the journey of life begins

Daughter to wife, wife to mother

Full circle, light in my eyes and I cry.”

When my mother died, my sisters and I lost our last parent (and really, our only one).  My aunt lost her sister and became the last of the first generation of N’s (we all refer to ourselves as N’s, D’s or M’s in our family meaning the Zelikovitz brother that we belonged to, Nathan, David or Max) – a very difficult place to be.  My cousins lost their aunt and beloved cousin.  Her friends lost the joy of having my mother around.  It’s so hard on everyone.  Her friends and family called me today, thinking about her, and crying too.

“You can never count your mother out – she’s hard to predict because she’s so tough.”

“If you had told me a year ago, I’d still be standing here talking to you about your mother, I would have told you that we were both crazy.”

“Your mother was an absolutely lovely woman…She had a wonderful outlook/attitude that I admired deeply.”

Those are all direct quotes from her doctors.  Even they recognized the type of person that she was.  The week before she died, her palliative doctor told me that though she wasn’t conscious, she could still hear.  She said that it was important to keep talking to her.  With at least a dozen people in and out all day, every day, we never had to worry about her not having something to listen to.  Even then, everyone wanted to be around her.  My sisters and I talked to her all day, every day, no matter how hard it was on us, we told her that if she needed to go, that it was ok.  The doctor gave me one last piece of advice, because my mother was so strong, she had to know that she wasn’t dying because she wasn’t fighting hard enough, it was just that she was too sick from all of her illnesses to go on.  Everyday, I told her that she fought so hard, but she could stop fighting and rest.  And eventually, she did, in her own time, in her own way. 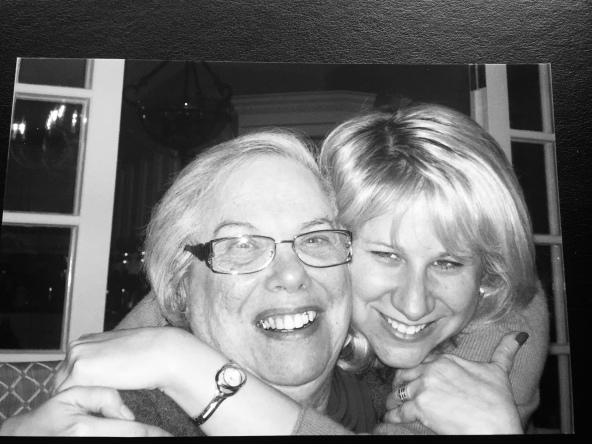 I’m often told by people what a wonderful relationship that I had with my mother, and some even said that they wished that they could have had the same kind of bond with theirs.  My favourite photo is the black and white picture above you – even though it’s not perfect, it perfectly illustrates us.  No one ever has made me laugh harder than she did, and no one ever had a better mother.  I spent a lot of time with her the last year, and many times, before I’d leave she’d say thank you to me for something that I did for her.  I’d always tell her that you never have to thank me, I wish I could do more.  I should have said, “No Mummy, thank you.  Just thank you.”  Wherever she is, I hope that she knows that on her birthday, and every single day, how much she is loved and missed. 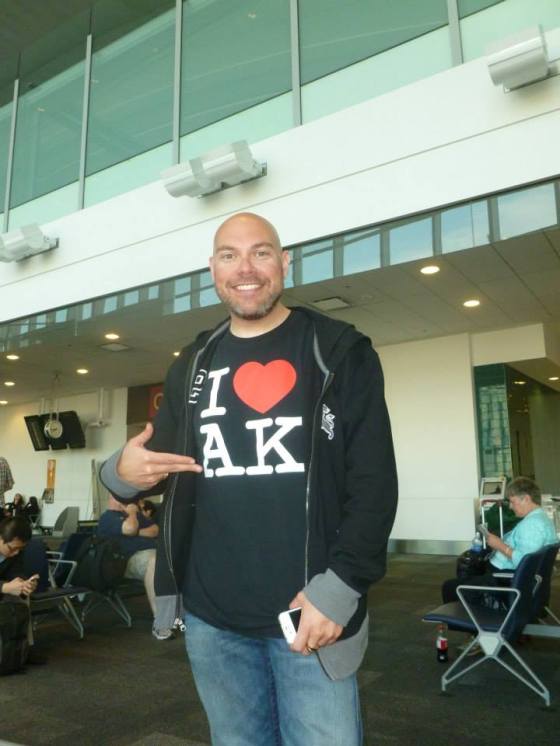 If any of you are regular readers of my blog, then you know that I have “Frousins” who are my cousins but also among my closest of friends.  The term Frousin was coined by the brilliant and handsome AK.  It perfectly describes our relationship – we are related, there is no doubt about that if you saw our mothers when they are afraid of being late, but we also laugh together, travel together and just enjoy hanging out, much like a good friend.  I’ve stopped doing birthday blogs, mostly because, I felt like as nice as they were, if you didn’t know the people, it was a great big in-joke that you, my readers couldn’t be part of. I decided to make an exception for AK since it’s a special birthday and he is so special to me.  In honour of your big celebration and inspired by this photo, here are 40 things that I love about AK:

Have a wonderful birthday and a happy, healthy year.  I can’t wait to celebrate with you! 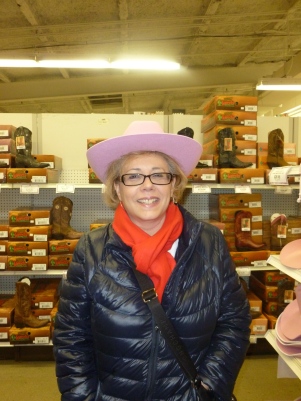 Maichie, it’s a special birthday – don’t worry – I’m not going to mention how special, but I thought you deserved another blog to celebrate the occasion.  Here are ten more things that I’m grateful to you for:

Happy Birthday Maichie – I hope that you have a wonderful day and that this year brings you everything on your wish list and then some.