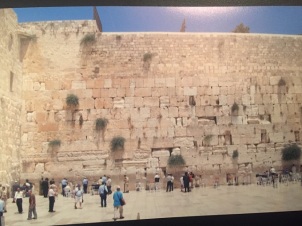 I leave for a media trip to Israel and I was asked to write a tweet about what I was looking forward to the most.  In so few characters and with a more general audience, it’s hard to put what I’m feeling into words.  I kept it simple and said the White City in Tel Aviv and the Old City in Jerusalem. Of course, experiencing the blend of modern and ancient that Israel possesses is incredible. I am happy to be doing everything from a tour of the Soda Stream factory to being moved by once again visiting Yad Vashem to seeing the beautiful Baha’i Gardens in Haifa.  There is one thing that I am looking forward to more than that though.  It’s not a place – it’s a feeling.

When I visited Israel for the first time in 2006, I was overwhelmed by many things.  What stood out to me the most though, was not the history of the country itself, although that was impressive, it was the knowledge that I stepped off of a plane and into a place that held so many memories for the people who were the most important to me.  My grandparents, Nathan and Sara Zelikovitz, visited in the late 1960’s and fell in love with this new nation.  My parents visited the country in the 1980’s and could not stop raving about it.  It was, and is, still a very important part of our family history.

When my mother passed away 4 months ago, I made a promise to myself to find ways to honour her memory whenever and wherever I could.  I never thought that I would be travelling so soon after her death, but when my friend Shai asked me about coming, one thought really struck me. I could say Mourner’s Kaddish (a prayer that you say for 11 months after the death of a parent or for 30 days after the passing of a child, spouse or sibling) for my mother at The Western Wall – the holiest site where I can pray as a Jew.  I am not religious in the least, but my mother was spiritual, and this is something that I can do for her and it will be especially meaningful in the land that she loved so much.  Once I finish, I will put a paper in the wall with what is believed to be, a written prayer to G-d.  Spoiler alert – it will be prayers of good health for my family, particularly, my oldest sister Michele who is also battling breast cancer.

On my first trip to Israel, I wanted a picture at the Wall simply because my grandparents and parents had photos from there and it was a chance for me to recreate a moment in time, even if my relatives could not be with me.  This time, my wish is that somehow, my mother will feel that I am doing this for her and that my grandparents will know too.

Not too long ago, when I was cleaning out my mother’s papers, I came across some letters that my grandmother wrote about her own trip to the country.  She wrote about how much she and my grandfather loved it and were so excited to be there.  She said that at dinner one night, they were served oranges from a grove that my grandfather owned, and he was bursting with pride.  I can picture the look on my quiet, unassuming Zaydie’s face.  To know that I’m going to be back in this country, a place that was so important to my family and to be able to honour my wonderful mother is what I am most looking forward to.