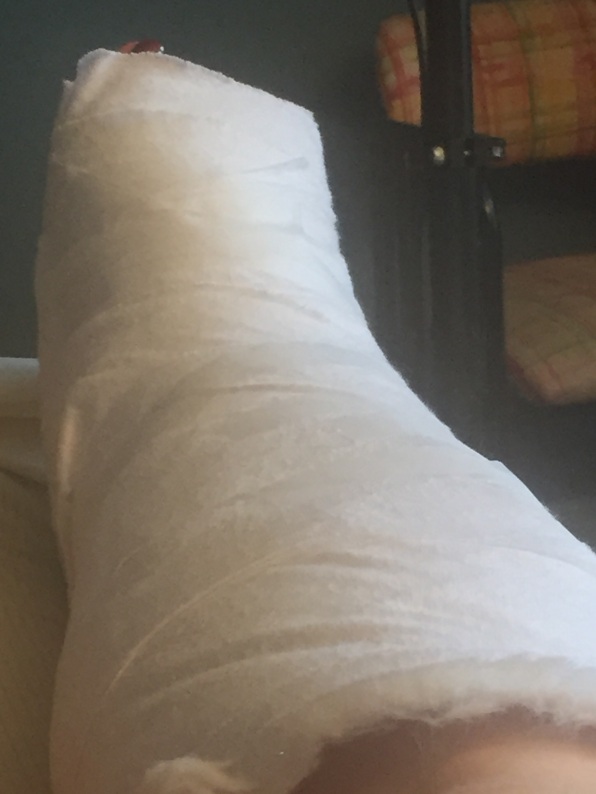 Having surgery if you have never been through it, can be a scary thing.  My only other surgery was when I was a year and a half and I do not have any memory of it.  I had almost a two day wait for ankle surgery.  The challenging part was I never knew when the surgery would happen.  When I had my oopsie moment, and was told that I would need to go under the knife, I was really hoping it would be immediate.  No such luck.  I went home, high on life (actually ketamine, which quickly wore off).  I was told to fast from midnight onward and they would be in touch.  I received a call at 8:30am telling me that the surgery would not be during the day, so I could eat up until 10:30am and to fast again until I got the call.  At 5:30pm, I received another call saying that the surgery would not be that night, that I was to fast again from midnight onward.  They told me that if I did not get in for surgery the next day, not to worry, I would be on the priority list for the day after that.  Lucky me!

When I finally heard from the surgeon later that night telling me that they had me booked for 8:30 the next morning, I was relieved.  As much as I feared having an operation, the alternative was to be in the non-healing limbo that I was currently stuck in.  It felt like progress at that moment.  Once again, I began to fast – it’s funny how I immediately got thirsty the second that I knew that I could no longer have any water!

I had to be at the hospital two hours prior to surgery, so my dutiful sister made the sacrifice and left the house with me at 6:00am.  Admitting is weird – everyone there will look better going into the hospital than they will leaving.  It was actually just me and other woman, who was clearly terrified.  I felt bad for her because in my own head I was on the road to recovery and nerves simply had not hit me yet.  Once I got through admitting, I was wheeled (in a chair) upstairs to the surgical waiting room and was taken immediately to Pre-Op.  I’m guessing that since I was a fall risk, the wanted me safely tucked away in a nice little stretcher.  You have to change into a gown, are given a robe, little foot covers and a surgical hat which makes you look quite silly.  If you have any modesty, which I did, at least at that point, you can also ask for disposable undies.

After some time went by, the anesthesiologist came to speak with me to ask me my weight (really, who do they think they are – that’s private), height and if I had any allergies. He mentioned that I would have a breathing tube inserted and he warned me that it may chip my teeth.  Horrified, I told him that better not happen and he assured me it was rare.  At this point, I got a little nervous and told him, and he just said not to worry, everything would be fine.  After another 20 minutes, the orthopedic surgeon came to speak with me.  If truth be told, he picked exactly the right profession – he was a real bone head.  Seriously, he gave me 30 seconds of his time and made it clear that he had zero interest in answering any questions.  I only had enough time to ask him how long the surgery would be (2 hours which seemed like a long time to me) and what the next steps would be (no pun intended).  He quickly told me that I would be in a plaster cast for two weeks and that I should stay as quiet as possible for that time.  I was basically only allowed to go to the bathroom.  I thought two weeks was a small price to pay for mobility.  He wasn’t Mr. Personality or Mr. Bed Side Manner and I reminded myself of one thing that my mother always said….as long as they can do their job, you do not need to be their best friend.

This was the point where I started getting really terrified because I knew that I was going to be wheeled into the Operating Room shortly.  My legs were literally shaking.  I tried to put on a brave face for my sister, but I could see that she was nervous for me.  They started wheeling me away, and wouldn’t even let me say good-bye to my sister.  The hall way was incredibly long.  As they wheeled me into the OR, I remember thinking how narrow the door was.  The room itself was so much smaller than what you see on TV.  It seemed not much bigger than a small-ish office.  It was painted a pink-ish purple that was kind of pretty.  I was struck by the number of people in the room already, and the surgeon hadn’t even made his appearance.  They made me slide off the stretcher and onto the OR table.  They told me to wrap remove the top of my gown and to tuck it under my arms like a tube top.  They hooked me up to a blood pressure/ECG (electrocardiography) unit and monitored my oxygen.  They barely spoke to me, talking about me, but not to me.  I lay there, freezing cold (it was like an icebox in there) with some vague promise of a blanket.

The anesthesiologist then told me that he was going to start an IV, and that he would place a mask over my face and that I should breathe into it.  Within 60 seconds, I would be asleep.  I completely thought he was full of it.  A short period of time went by and I was thinking, what if I don’t fall asleep?  I then got really light headed and the last thing that I remember saying was “I don’t feel very well….”  I woke up knowing that time had past, but with no memory of the surgery.  It was a dark sleep, no dreams.  I was overcome with horrible nausea, so they administered something to help….and it didn’t. They tried something else and it didn’t work either.  They tried something else, and still, I was so nauseated and dizzy, it was unbearable.  A little while later they let my sister in and she told me that two of my closest friends were there, but I was still so sick, I couldn’t think.  The nurse asked her to leave.  I was on anti-nauseant #7 when she told me that she only had half a dose left to give me.  She said to try to sleep it off, and I was so groggy that is exactly what I did.  I was supposed to be out of the hospital by 12:30 but at 2:30, I finally woke up.  I felt a little better.  After another half hour, I was allowed to move into a chair, and then I was finally allowed to see my sister.

We sat there for awhile and I was beyond thirsty and was allowed a small drink.  You are not allowed to leave until you can drink and eat something small.  Crackers it was!   After another hour and a half, I was finally allowed to leave.  My friend kindly drove us home and helped me get settled into bed (after mocking my crutch abilities).  I stared down at my fluffy white cast and thought, I just have to get through two weeks of this….

Which will lead into Castaway – The Recovery – Stage 1 – tune in next week to find out if I went stir crazy – how I passed the time, and what home medical aids everyone with mobility issues needs!

Hello and welcome to my blog. This started as a one year experiment to try to improve my health, turning to Dr. Oz for advice. One year became two and after that, the writing bug hit and writing about travel, lifestyle and my own musings became more fun so my blog evolved from The Whiz-Ard That is Dr. Oz into Jill of Some Trades. After the death of my mother, I added grief to my list of topics and this became a place for me to remember the good, but embrace the sad as well. I'll never write about any one thing - there is just so much in the world to comment on. Life is all about crying and laughing and learning, sometimes all at once and this is what I hope that my blog is for you.

One thought on “Cast-Away: Surgery”